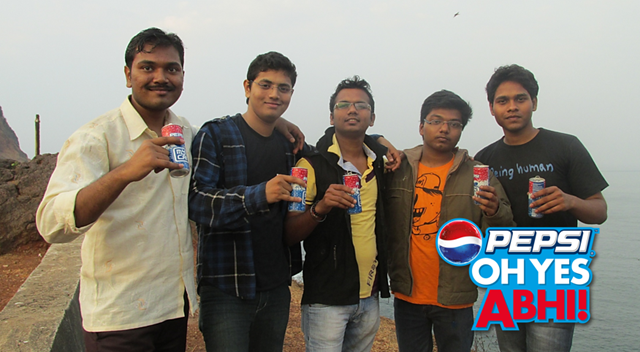 Presenting ‘Oh Yes ABHI Shot 60 sec ‘, a film Created by me. This time it’s for ‘Pepsi Shot 60 sec’ contest. The rule was clear, I had to create a story, choose the cast & music, select the location, Shoot and Edit the videos for making a Not-More-Than 60 sec video film within 24 hrs.

Like all my previous work, this film is also shot from the Camera borrowed from The-Person-I-Never-Talked-Before for which I heartily thanks to Mr. Mannan Kadri for his amazing Canon and Nokia C7.

Well I have done it and now waiting for the Judges review, Fingers crossed.

The experience was amazing, we had lots of masti during the making of this film, will write about it in more details in next post. Till then, enjoy the film and let me know what you think.

The story is about friends who-die-for-each-other, for whom spending times with friends are more than doing any other things in the universe.

The film talks about a guy (played by Arjun) who is waiting for a train at railway station, going back to his home town, then suddenly a friend popup from his smartphone and wished if “they could have 1 more day of fun”. Taking a sip of Pepsi, Arjun thought if that’s what we want then why not Abhi ishi waqt. He typed a message “Jis waqt jo dil kare wo tabhi kyun nahi, ishi waqt ishi jagah, abhi kyun nahi ‘and sent it to all his friends. Upon receiving the message all his friends (played by Diptesh, Nitish, Mannan, Pawan) jumped out of whatever they were doing and started running towards their local hangout place. Now everyone is at Hangout place, hugging – talking to each other and celebrating their last meet with Pepsi.

That’s all about the Idea. Hope you’ll like it.